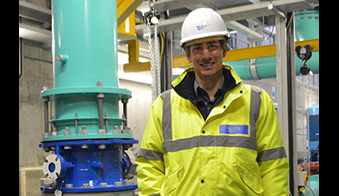 Matthew Foyle IEng MIET has won the 2018 Baroness Platt of Writtle Award for his outstanding work with Wessex Water. Presented by the Worshipful Company of Engineers at its Annual Awards presentations on 10 July 2018, this prestigious annual award recognises the achievements of a newly registered Incorporated Engineer (IEng). Matthew was presented with a medal, certificate and prize money of £1,000.

Matthew is an excellent role model for career progression from apprentice technician to Incorporated Engineer. While working full time, he has completed not only an ONC, HNC and HND, but has progressed to obtain a 1st Class Honours degree in Professional Engineering from Aston University and is currently studying for a Masters.

In the work environment he is responsible for mechanical and electrical design for Wessex Water, showing detailed understanding of the control and safety systems assuring water quality, as well as a good awareness of the environmental and microbiological factors that the process must control. An enthusiastic advocate for innovative technology, Matthew is proactive in introducing new technology to his organisation, as evidenced by his championing of the development of 3D CAD and Building Information Modelling (BIM). The model covers demolition and reconstruction of buildings, the mechanical and electrical installations and the inventory management for the new equipment all within a tight space, which requires careful planning and phasing of tasks to ensure a safe working environment for all trades. He has co-ordinated cross-disciplinary teams in development of the 3D model, which is expected to support longer term maintenance planning and asset management.

Matthew’s career shows rapid progress, recently being appointed Project Manager responsible for multiple projects of up to £16 million. He is proactive in encouraging school and college leavers to enter the profession, helped developed his employer’s mechanical and electrical (M&E) apprenticeship recruitment programme and actively drives closer links between Wessex Water and the Institution of Engineering and Technology (IET).

Matthew Foyle said: “I am delighted to have won the Baroness Platt of Writtle award. My career in the water industry has always been both exciting and challenging and it is an honour to have my achievements recognised by the Institution of Engineering and Technology and the Worshipful Company of Engineers. I would like to thank my family and colleagues for all their support and I will continue to share my enthusiasm for engineering with young people and encourage them to follow this extremely rewarding career.”

Approximately 1,300 individuals achieve IEng status every year. Matthew was nominated for the Baroness Platt of Writtle Award by the IET and judged against thirteen others who had been nominated by five professional engineering institutions. Seven nominees were interviewed. The judges were particularly impressed by Matthew’s effort to pioneer the use of 3D CAD and BIM in Wessex Water.

Peter Blair-Fish, Junior Warden of the Worshipful Company of Engineers, said: “The award is one of many made each year by the Engineers Trust, which is the Charitable Trust Fund of the Worshipful Company of Engineers – see www.engineerstrust.org.uk. This award is for Incorporated Engineers of all disciplines. This year saw an exciting spread of nominees working in a variety of industries from highways, water, cranes, electrical services, health services, defence and works in Antarctica. Their nomination papers demonstrated a very high standard of engineering and professionalism. As the marks for first and second place were extremely close, the judges asked that the runner-up, Chris McGinness of BAM Nuttall, nominated by the Institution of Civil Engineers, be highly commended.”

Chris McGinness started his career as a Graduate Engineer, working up from Site Engineer to Sub Agent on projects including the Edinburgh Trams Network and the Borders Railway Project. He is now Lead Planning Engineer with BAM Nuttall on the upgrade of research stations and marine infrastructure in Antarctica. At his interview, he showed how he had developed practical solutions in very challenging environments including the risk of damage by icebergs during construction of marine structures in the Antarctic. As a STEM ambassador, he visits schools to promote civil engineering and organised a site visit for a local school. The judges were impressed by his excellent communication skills and great enthusiasm for his work.

Alasdair Coates, CEO of the Engineering Council, added: “I would like to congratulate Matthew Foyle this year's worthy winner of this prestigious award and an outstanding IEng registrant. It is pleasing to see that the high calibre of candidates has resulted in the judges selecting a second candidate as highly commended and I congratulate Chris McGinness on his commendation. The Engineering Council would like to thank the Engineers Trust for recognising both the essential contribution Incorporated Engineers make to all sectors of the engineering profession and these individuals through this award.”

Nominations for the 2019 Baroness Platt of Writtle Award will open early next year. Professional Engineering Institutions will be able to nominate up to five members who achieved IEng status in 2018. Nominees should, in the view of their institution, have displayed outstanding commitment to the engineering profession, have excellent communications skills and have demonstrated management qualities. Please see www.engineerstrust.org.uk for further details.

This year is the sixth time that the Baroness Platt Award has recognised an outstanding newly registered Incorporated Engineer. The Award was originally established by the Worshipful Company of Engineers to recognise engineering excellence amongst those pursuing final year studies leading to the academic qualifications needed for Incorporated Engineer status. It was awarded in this form from 2002 to 2012, with the assistance of the Institution of Incorporated Engineers and later the Institution of Engineering and Technology in selecting the Award winner. The award is limited to British citizens or those who have resided in the UK for at least five years and whose principal residence is in the UK.

The Engineers Trust is the Worshipful Company of Engineers’ Charitable Trust Fund (Registered Charity No. 289819)

The IET is one of the world’s largest engineering institutions with over 169,000 members in 150 countries. It is also the most interdisciplinary – to reflect the increasingly diverse nature of engineering in the 21st century. Energy, transport, manufacturing, information and communications, and the built environment: the IET covers them all. The IET is a registered charity that is working to engineer a better world by inspiring, informing and influencing our members, engineers and technicians, and all those who are touched by, or touch, the work of engineers. It aims to inspire the next generation of engineers, and to promote engineering and the work of engineers to society. We want to build the profile of engineering and change outdated perceptions about engineering in order to tackle the skills gap. This includes encouraging more women to become engineers and growing the number of engineering apprentices. For more information, visit www.theiet.org