Four engineers have been awarded the prestigious Queen Elizabeth Prize for Engineering for their combined contribution to digital imaging. British and Japanese engineers Michael Tompsett and Nobukazu Teranishi, and US engineers Eric Fossum and George Smith were announced as winners in the presence of HRH The Princess Royal at an event at the Royal Academy of Engineering on 1 February. 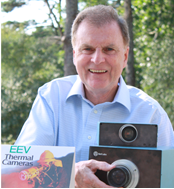 The £1million prize celebrates world-changing innovations in engineering and was awarded for three innovations spanning three decades, which have radically changed the visual world. These include the charge coupled device (CCD), the pinned photodiode (PPD) and the complementary metal oxide semiconductor (CMOS) image sensor. Digital imaging sensors have enabled high-speed, low-cost colour imaging at a resolution and sensitivity that can exceed that of the human eye. They offer instant access to images ranging from minute cell structures to galaxies billions of light years away, transforming medicine, science, communication and entertainment.

In the 1970s George Smith and Willard Boyle (now deceased) developed the CCD, which was later used in imaging by Michael Tompsett (pictured right). The CCD is the image sensor found inside early digital cameras that converts individual particles of light into an electrical signal. The charge is then converted into a binary digital form by an analogue-to-digital converter, and the image is stored as digital data. Intended for use in computer memory, Tompsett recognised the imaging potential and invented the imaging semiconductor circuit, complete with analogue-to-digital converter.

The following decade, Nobukazu Teranishi invented the modern pinned photodiode, which reduced the size of light-capturing ‘pixels’ and significantly improved the quality of images. The development of the CMOS sensor by Eric Fossum in 1992 allowed cameras to be made smaller, cheaper and with better battery life. 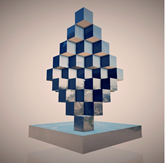 QEPrize Chairman, Lord Browne of Madingley, said: “The 2017 Queen Elizabeth Prize for Engineering is awarded to four engineers who have revolutionised the way we capture and analyse visual information. The spirit of international collaboration which drives the work of George Smith, Michael Tompsett, Nobukazu Teranishi and Eric Fossum encapsulates perfectly the ideals of the Queen Elizabeth Prize for Engineering. In honouring them we hope to inspire the next generation of engineers to continue to push back the frontiers of the possible.”

The winners will be formally honoured in a ceremony at Buckingham Palace later this year and, along with the prize money, will each receive an iconic trophy (pictured left) which was designed by 15-year-old Samuel Bentley from Wales. His design was selected through an international Create the Trophy competition.

More information about the Prize, the 2017 winners and trophy competition is available by clicking on qeprize.org/winner-2017