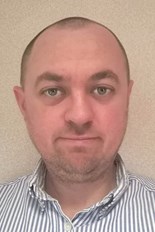 Please describe your current role
As Principal Planning Engineer I work on tender and operational planning on a number of projects. Working closely with tender teams I ensure that competitive tenders are submitted. In an operational role, I am responsible for working with the site teams to ensure lean construction planning and recovery of costs.

Describe your experience of how you became an IEng
I was the first person within BAM Nuttall to gain IEng status through an employer-led further learning programme. The programme is accredited by a group of institutions known as the Joint Board of Moderators (JBM) and I was required to demonstrate learning of 17 outcomes set by the JBM. This was achieved through separate reports that were reviewed by a variety of approved assessors throughout the company. Upon completion of the outcomes, I sat a three hour peer review before I was approved as an IEng.

What advice would you give someone considering professional registration as an IEng?
I would advise them to make a firm commitment to the process. The hardest part is making a start.

How has becoming an IEng benefitted your career?
My commitment to achieving IEng has not gone unnoticed with my employer and they recognise the personal effort and achievement involved.