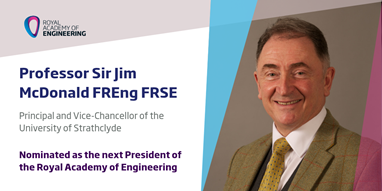 The Engineering Council would like to congratulate Professor Sir Jim McDonald CEng FIET FIOP FREng FRSE, Principal and Vice-Chancellor of the University of Strathclyde, on his nomination as the next President of the Royal Academy of Engineering (RAEng).

The nomination will be voted on by Fellows at the September 2019 AGM. Upon election by the Fellowship, Sir Jim would serve a term of five years and would become the RAEng’s first Scottish President.

Sir Jim McDonald is one of Scotland’s most accomplished engineers, and co-chairs the Scottish Government’s Energy Advisory Board, with the First Minister. He is Chairman of the Independent Glasgow Economic Leadership Board and holds senior business appointments with the Weir Group, Scottish Power, the UK Offshore Renewable Energy Catapult and the UK National Physical Laboratory.

Born in Glasgow, Sir Jim studied for his first degree in electrical engineering at the University of Strathclyde and started his engineering career as a graduate apprentice on the Scottish Electrical Training Scheme. In the Queen’s Jubilee Birthday Honours List on 16 June 2012, Professor McDonald was awarded a Knighthood for services to education, engineering and the economy.

Please see the full announcement of the nomination from RAEng for further details.