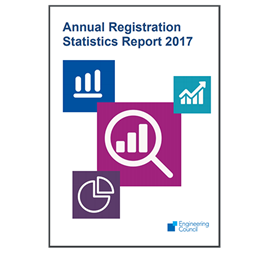 The highest number of new Engineering Technicians (EngTech) ever recorded joined the Register in 2017, after a record year in 2016. This positive trend may reflect increasing interest in apprenticeships as a pathway into engineering.

Women continue to represent almost 11% of new stage final registrants in 2017, with 1,059 female engineers added to the Register. The proportion of Chartered Engineers who are female is higher than for other registration titles, at just over 13%, compared to 6.39% of Incorporated Engineers and 6.65% of Engineering Technicians.

“We are pleased to see positive trends, with the number of new final registrations increasing year on year and an unprecedented number of Engineering Technicians becoming registered in 2017. Registration is open to any practicing engineer or technician who can demonstrate the required level of competence – there are many routes into engineering, but the standard achieved is what matters. It is noted that overall the growth of just under 5% over the last five years is an indication of the value of professional registration.

* All statistics provided in this release are as of 31 December 2017.