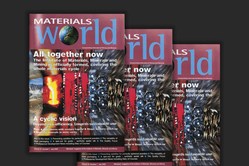 In June 2022, The Institute of Minerals, Materials and Mining (IOM3) marked 20 years since its creation. IOM3 is one of the professional engineering institutions (PEIs) licensed by the Engineering Council.

The merger of the Institute of Materials (IoM) and the Institution of Mining and Metallurgy (IMM) to create IOM3 brought together two membership bodies with complementary interests. It took place after the memberships of both organisations had given their support of the move via Extraordinary General Meetings of their members. The focus was on creating an institute intended to become “the global network for the materials cycle” covering materials, minerals and mining interests and activities from cradle to grave.

Sir Colin said "It was a huge pleasure and privilege to be the last President of IoM and then the first President of IOM3 from 2002-2003. The ground had been expertly prepared for the merger between IoM and IMM by the previous IoM President, Bruce Farmer, and the then CEO, Bernie Rickinson.

My main priority was to make this marriage happen and to cement the relationship between the two partners. This was greatly helped by the strong bond I formed with the last President of IMM, Jane Plant, who sadly died in 2016, and with their CEO. The two Presidents and CEOs formed a great team to plan and execute this merger."

Find out more about IOM3's 20th anniversary on their website, including an official timeline and complete list of Presidents.