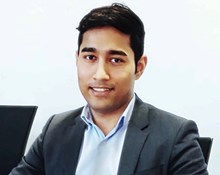 Please describe your current role
As an Independent Mechanical Design Engineer I carry out professional engineering design services on behalf of third-party clients. I am currently on an engagement with an Italian defence firm Leonardo, based in Bedfordshire, where I originally worked from 2007 to 2014. At Leonardo I have had the opportunity to be involved in various aircraft projects, working mainly on the Eurofighter Typhoon upgrade/retrofitting programme. Having previously worked here as a staff member returning on an independent basis, it puts me at a slight advantage; being able to build on the already established rapport with the people I had worked with in the past and the processes involved in getting things done.

Here, I’ve earned their trust and have taken on a significant role within the Mechanical Engineering group. This raises my profile within the business as well as giving me a sense of fulfilment. I have been involved in presenting various technical proposals to the project team, leading and contributing in design reviews and managing workload and resources, on top of the day-to-day design activities. Additionally, I am involved in the development of apprentices; I mentor and guide them in the delivery of engineering projects during their short stay in the department.

What do you find most enjoyable about your job?
My job typically requires complete involvement, from the design stage all the way to manufacture. It’s always a nice feeling to see that what you design gets realised into working hardware. Solving engineering problems excites me in a way that I can’t put into words, which I’m sure other engineers could relate to. Seeing the product I design going into platforms that help secure Britain’s defence capability resonates with my sense of patriotism and pride too. I look at it as part of giving back to the community.

Please provide a brief outline of your career so far
I started my journey in engineering in 2007 as an apprentice for a multi-national defence corporation known then as SELEX Sensors and Airborne Systems, now Leonardo. At SELEX I had the opportunity to work with industry-leading experts on some of the world’s most advanced military products and technologies.

I completed my apprenticeship in 2011 with a Higher National Diploma (HNC) in Mechanical Engineering in hand. I then applied to become professionally registered as an Engineering Technician (EngTech), and my application was approved in the same year. My apprenticeship provided most of the evidence I needed to become an EngTech, so it was a straightforward process. I would certainly recommend apprenticeships, they are a great way to get into the job market early, learning and getting paid at the same time.

I took the initiative to further my studies and in 2014 I completed an honours degree in Engineering at Northampton University. Two years later I finished a post-graduate programme with the Open University.

In 2014 I also had a short but eye-opening period of working for Smiths Connectors as a design engineer. I was part of the team designing interconnect solutions for the aerospace industry, both for civil and military applications. Interconnect design, which requires knowledge of both electrical and mechanical engineering, reflects the type of engineer that I am today; an Electro-Mechanical Engineer.

In January 2015 I took the leap to form my own limited company to work on a contract basis. I have not looked back.

In 2015 I worked alongside a medium-sized Dorset company on the Royal Navy’s most advanced submarine fleet. The project involved a submarine’s on-board, naval communication rig design. I took part in various stages of the project including leading the engineering team that delivered the design and manufacture of various power distribution/supply units, which were later qualified and commissioned.

Following a short spell at Thales UK in 2017 working on a low band antenna for a maritime application, I returned to Leonardo in August 2017 as an independent Mechanical Design Engineer, where I am now.

Have you worked on any unusual or high profile projects?
Working predominantly in the defence sectors has meant working with a lot of cutting-edge technologies. Based on the sheer size of the work package, the most high-profile project I have been involved in was working on the Eurofighter Typhoon. I was involved in mechanical design of the aircraft protection suite, such as integrated sensors, decoys, cockpit display units and the radar system.

I have taken part in a series of decoy projects, working on sensors and targeting devices for various military platforms including helicopters and sea vessels. I have also had opportunities to travel for trial and fit activities to support those programmes.

What spurred you to work towards registration as an Incorporated Engineer (IEng)?
As the world becomes smaller through globalisation, engineers are more mobile than they used to be. Professionally registered engineers are highly respected, not just in the UK but throughout the world. I have plans to venture overseas and so felt that progressing to become professionally registered as an IEng would open up more opportunities for me in the future. It is also evidence of my tenacity and hard work and sets me apart from potential competitors.

How did you become registered as an IEng?
The process was quite straight forward. I took advantage of the Career Manager tool on the Institution of Engineering and Technology (IET) website. It allowed me to self-assess my skills and knowledge against the UK Standard for Professional Engineering Competence (UK-SPEC) and record my achievements as I progressed through my career.

I also had a mentor, a former supervisor, with whom I had discussions roughly every fortnight via Skype. It took me a few months to compile all the necessary reports and evidence, including waiting time for the panel assessment and interview.

How has professional registration as an IEng benefitted your career?
The responsibilities that come with the title have made me a better engineer. It has changed my approach to decision-making, knowing that I must abide by a professional code of conduct, sanctioned by the profession. The IET Career Manager tool and the Engineering Council’s requirement to maintain my competence through Continuing Professional Development (CPD) ensures that I stay on top of new developments within engineering. The net result of this is to unlock the prospect of using different solutions for problem solving; the novel non-conventional solutions.

What advice would you give someone considering professional registration as an IEng?
Assess your competences and skills against UK-SPEC to decide if you are ready to apply. If possible, get yourself a professionally registered mentor who can help you to assess your experience and competences against the standards set for IEng, or even Chartered Engineer (CEng). You may be surprised to find out how ready you really are.

As a self-employed engineer, what is the value of being professionally registered?
From my own experience, I have always highly valued working with professional engineers, knowing that they are reliable and have worked hard to get to where they are. I would like to see more engineers go for professional status.

Clients are demanding more frequently that engineers are professionally registered as either a CEng or IEng. Being an IEng is another box ticked for potential business wins. I urge my fellow self-employed engineers to do the same to make them stand out in the increasingly competitive job market.

HM Revenue & Customs also acknowledges the positive impact of professional registration, by allowing any costs incurred to be declared as expenses. As a self-employed engineer this opportunity meant I could reduce the amount of corporation tax that the business was liable for.

What are your future goals?
My ultimate goal is to become a Chartered Engineer (CEng). Having recently completed my Post Graduate Certificate, I am working towards a Postgraduate Diploma and eventually plan to add an MSc, both in Technology Management. All of this, combined with further work experience, will reinforce my application to become Chartered.

My ethos is that knowledge is for sharing. My partner and I are both engineers and one day I would like to be in position where we both can work together to promote engineering to young adults from poor families in less developed parts of the world.

Do you participate in any other career-related activities, such as mentoring, volunteering or membership of other engineering groups?
This is certainly something that I’d like to get involved more in. For a while I was a Science, Technology, Engineering and Mathematics (STEM) Ambassador, promoting apprenticeship schemes as an alternative to the A-level and degree pathway. I travelled around Bedfordshire and Hertfordshire meeting school leavers and college students to promote what I do and the benefits of apprenticeship.

These days, I enjoy going to engineering lectures and taking advantage of courses organised by IET and other engineering institutions, such as the Institution of Mechanical Engineers (IMechE). However, as I am currently focusing on completing the Post Graduate Diploma my time has to be prioritised.

Outside work, is there any activity you enjoy doing in your spare time that relates to engineering?
I enjoy getting my hands dirty and getting involved in anything hands-on. Outside work, I tend to fix and service my own cars and sometimes stretch to other people’s too. As a hobby, I am a scale modelling enthusiast and enjoy building my own scale aircraft models (1940s era onwards). This hobby stems from my early childhood days, inherited from my father.