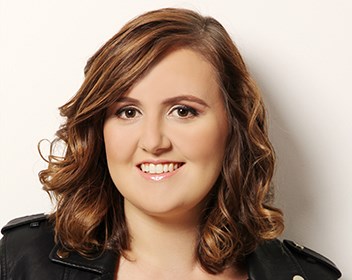 What inspired you to become an engineer or pointed you towards an engineering career?
Family influence – my dad was an engineer and suggested I applied for an apprenticeship in railway signalling design at the company he was working for; I thought I would give it a go and see what happened. I enjoyed the variety of the work as well as the placements that I was able to do. I was mainly office-based, using Computer Aided Design (CAD) to produce wiring diagrams and other tools to produce data which controls the movements of trains when getting from one place to another. Additionally, I was able to do practical work by doing testing on the tracks with the testing team. Thirteen years later I’m still going!

Please describe your role or position within your workplace.
My role as an EC&I Engineer is to produce documentation for systems and equipment, which are important to safety in nuclear power stations. This can be anything from producing safety cases, technical design specifications, factory acceptance testing specifications and subsequent reports, to undertaking equipment qualification and producing a final report of the outcome. Additionally, I am involved in stakeholder management, producing tenders for work and undertaking the Responsible Engineer role, to ensure work is delivered to time, quality and budget. I have also recently taken on some line management duties within my team, reviewing resourcing and utilisation.

Can you describe a typical working day?
Most days are different, but a lot of my work involves internal discussions and client discussions. I’m also involved in researching and reviewing standards and finding drawings, work instructions or other documentation for the nuclear power station that I am working for, and then documenting the findings in reports, technical specifications or safety cases. On less ‘typical’ days I will be at the nuclear power stations undertaking plant walkdowns with the system owner to learn about the system and what the task will involve. Tasks can include things like reviewing ageing and obsolescence issues of a system or piece of equipment, in order to find a way forward to mitigate or fix the identified issues. On other days I will be writing the tenders for work requests.

Are there any particular challenges or unusual aspects to your role?
I think the main thing is the safety-critical nature of the work and knowing the massive impact that a radiological release could have. It makes you constantly think about how important the work you are doing is.

What do you find most enjoyable about your job?
I enjoy the variety more than anything. Most of the projects I work on are fairly small tasks and no two tasks are ever the same, which means that I’m regularly undertaking different aspects of work, looking at different systems and talking to different people. I’m constantly learning and being challenged in the work I am doing.

Is there a great professional achievement or high-profile accomplishment that you would like to tell us about?
I’ve won a few awards – the Special Merit award at the Institution of Engineering and Technology (IET) Young Woman Engineer of the Year Awards, Thames Valley Region Apprenticeship Champion award and also the Young Rail Professional of the Year award 2014. The latter is probably the greatest achievement because I was secretly nominated by a colleague who acknowledged my achievements and saw potential in me. I knew nothing about it until I received an email inviting me to the awards evening and informing me that I was a finalist.

What contributed to your decision to become professionally registered?
Starting as an apprentice, it was something that we were encouraged to do from the get-go. Our apprenticeship scheme was accredited by the IET which enabled us upon successful completion to apply for Engineering Technician (EngTech) registration. We were then encouraged to start gathering evidence for Incorporated Engineer (IEng) and Chartered Engineer (CEng) registration. Knowing that professional registration provided current and future employers with confidence in our competence meant it was something that I was very interested in. Additionally, having only achieved an Ordinary National Certificate (ONC) academically, I hoped gaining professional registration would demonstrate the competence I’d developed through experience.

In what ways has registration benefitted your career?
Registration proves to my employer and future employers that my career and professional development are important to me and that I want to strive to be the best I can be. Through professional registration you are obliged to take an active role in your own career development, which I believe demonstrates to employers you’re willing to succeed and have the right attitude towards your work. Additionally, if like me you decide you want to change industries, I think it is a huge advantage as it gives other industries confidence in your ability to succeed, underpinning knowledge and technical competence that you have gained through your career so far. On a personal level, gaining IEng status gave me a massive confidence boost in my own abilities!

How does your employer benefit from your professional registration?
It demonstrates to outside organisations that the engineers employed in my company are at an internationally recognised level of professional competence which has been judged by an impartial third party. This helps when undertaking bids or tenders for work, as it provides confidence in the ability of the staff being named for the tasks.

Is there any advice you would pass on to someone considering professional registration?
I was actually unsuccessful in my initial IEng application despite getting through to the interview stage and although it knocked my confidence I’d say never give up! I got there in the end and it felt amazing! I learnt so much between the two applications and spoke to various people for support who were more than willing to help. So I’d also say always remember to ask for help if you need it or if you are not sure. The benefits at the end and the learning through the process are so worthwhile.

Where do you see yourself in your career in five years’ time or what are your future ambitions?
My future ambition is to carry on progressing in the role that I’m in, continue learning and to progress to become a CEng as well as a Fellow of the IET.

Do you participate in any other career-related activities, such as mentoring, volunteering or membership of other engineering groups?
I am a registered volunteer for the IET’s professional registration mentoring and also an IET Young Professional Ambassador. More recently, at work I have taken on the role of Office Champion for the Jacobs Women’s Network. This role is about creating a network within my local office for people who support the values and aims of the overall Jacobs Women’s Network. It’s about finding out what people in the office want and what they want to see changed, holding socials and meetings to discuss ideas, collate feedback on monthly topics and encourage gender equality in the office.

Outside work, is there any activity you enjoy doing in your spare time that relates to engineering?
To be honest aside from taking our children to the Museum of Science and Industry and my ambassador role, not really. Outside of work I am a keen swimmer. I train and compete for one of the local Master’s Swimming Teams so that and spending time with family takes up a lot of my spare time.