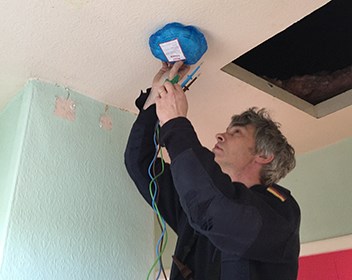 Education and qualifications:
Licentiateship of the City and Guilds of London Institute (LCGI)
Level 4 Electrical Installation

What inspired you to become an engineer or pointed you towards an engineering career?
I had always had an interest in science and technology, so when I was about to leave school I was intrigued by a wall chart that I saw about electrical engineering. I saw that the requirements for relevant university courses would require A Levels in Mathematics and two sciences. I considered myself not academically gifted in that direction, but my school careers advisor suggested that I should go for an apprenticeship as an electrician. Unfortunately, 1981 was not a good year for seeking an apprenticeship as the vast majority of companies within the region were making thousands redundant due to a dramatic downturn in industry in general at the time. However, as part of the process of applying for an apprenticeship I sat the Construction Industry Training Board (CITB) competency examination and received a financial award, which in today’s terms was worth nearly £18,000. This enabled me to begin my studies to become an electrician.

Please describe your role or position within your workplace.
My key responsibilities are to ensure that electrical installations are safe for use by the general public. I work for a registered social landlord, so the majority of these installations are classed as domestic.

Can you describe a typical working day?
On a typical working day, I test and inspect electrical installations, identify anything I consider dangerous, rectify the problem and compile a report and supporting documentation. No two days are ever the same and you never really know what to expect.

Are there any particular challenges or unusual aspects to your role?
The important thing is to expect the unexpected because every day presents a different challenge. I enjoy the variety and the challenge of applying the standards of today against the standards of days gone by. In the UK, all new electrical installations must comply with the current version of BS7671 (the Institute of Engineering and Technology (IET) Wiring Regulations), but the majority of installations that I inspect were designed and constructed to previous versions of the Wiring Regulations.

What do you find most enjoyable about your job?
I find the problem-solving aspect the most enjoyable, though possibly not at the time.

Is there a great professional achievement or high-profile accomplishment that you would like to tell us about?
Probably moving membership grades from TMIET to MIET. Professional engineering qualifications are less well known in the industry I currently work in than vocational qualifications such as City and Guilds and NVQs, but as I’m involved with the electrical side of things, I’m constantly dipping into the IET Wiring Regulations and I looked at all the qualifications that members of the national Wiring Regulations committee held. I never thought I would gain comparable qualifications.

What contributed to your decision to become professionally registered?
I was not aware of the possibility of professional registration until I became involved with the Institution of Electrical Engineers (IEE),before it became the IET. Then, about nine years ago, the company I worked for asked if anyone would like to take any work-related qualifications, so I decided to apply for EngTech.

In what ways has registration benefitted your career?
I believe achieving registration as an EngTech has benefited my career in a number of ways. It has set me apart from other technicians and being an EngTech proves my competence to my employer and shows them that I have an internationally recognised professional title.

How does your employer benefit from your professional registration?
Employees who are professionally registered stand out because their employer knows that they have undergone a thorough independent assessment of their skills, competence and commitment and been found to meet an internationally recognised standard. My employer was very supportive, allowing me the time I needed to complete the necessary forms and attend my professional registration interview. It would have been quite hard to do this without their assistance.

Is there any advice you would pass on to someone considering professional registration?
If the thought of applying for registration seems daunting, I would reassure them that the process is straightforward. It is just a matter of approaching each competency requirement in the context of what you actually do on a daily basis. I would recommend that anyone interested in applying should do so, they will not be disappointed.

Where do you see yourself in your career in five years’ time or what are your future ambitions?
My future goals are to progress to Incorporated Engineer (IEng) and perhaps onwards to Chartered Engineer (CEng).  I have just recently mentored an individual to gain EngTech; this was gained a few weeks ago.

I am involved with the IET as an Education Officer for West Yorkshire, which keeps me busy. I’m looking forward to being a bit more engaged with the educational side of things - it has obviously been very difficult for everyone during the Covid-19 pandemic over the past few months but, fingers crossed, we will return to some sort of normality. That means that I can get back to careers fairs and presentations again. I am committed to the institution’s vision, mission and values and promoting them to a new generation of engineers.

Outside work, is there any activity you enjoy doing in your spare time that relates to engineering? For example, do you participate in mentoring, volunteering or membership of other engineering groups?
I’m registered with the IET as a professional registration assessor for the grade of Electrician EngTech and I’m registered as a professional registration mentor. Over the years I’ve guided a number of people to gain EngTech status. I was recently appointed as an EngTech Assessor with the IET and there are other things in the pipeline; I like to keep moving.

In addition, I try to do as many careers fairs as possible, such as holding a stall for two days at the Bradford Science Festival ─ and I distribute as much IET and Engineering Council literature as I can.