The Royal Academy of Engineering and Science Council have launched a new framework to improve diversity and inclusion across science, technology, engineering and maths (STEM) careers. The framework, the first of its kind, will help professional bodies to assess and monitor their progress on diversity and inclusion. A launch event was held at the Institution of Civil Engineers on Thursday 15 December.

A new Academy report shows that while engineering graduates are highly employable, there is a noticeable difference in how quickly different ethnic groups fare in the job market, with 71% of white engineering graduates finding full-time jobs after six months, compared with just 51% of black and minority ethnic (BME) students.

Looking at other research available, the two organisations highlight that the science and engineering communities have a long way to go in building a more diverse culture. For example: 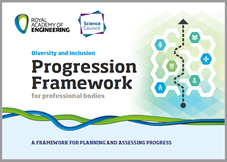 Professional bodies play an important role in supporting scientists and engineers throughout their careers. The new progression framework builds on the Engineering Diversity Concordat and the Science Council Declaration on Diversity, Equality and Inclusion. It identifies diversity and inclusion practice in relation to eight functions common to professional bodies and supports discussion, initiation, planning and assessment of diversity and inclusion work.

Philip Greenish CBE, Chief Executive of the Royal Academy of Engineering, says: “Professional bodies form the backbone of the engineering profession and we intend that this framework will provide them a clear and transparent tool to make a step-change in improving diversity and inclusion.”