After five years working for the Women’s Engineering Society (WES), including a successful year as the organisation’s Chief Executive, Dawn Bonfield MBE has stepped down from the role.

Dawn has worked tirelessly for WES, first as a volunteer, then President before taking over the role of the WES Chief Executive a year ago. She is the founder of National Women in Engineering day, and several other recent initiatives at WES including the Sparxx programme and the Magnificent Women outreach activity.

WES has grown substantially over the past ten years. The Society’s Council had contemplated the possibility of employing a chief officer to run and lead the Society for some time. Due in large part to Dawn’s hard work, last year WES was finally able to commit to starting on the process of defining the role and then to recruit. With the permission of the Charity Commission, Dawn was appointed as the organisation’s first paid Chief Executive in the 21st century while the Board, with Dawn’s support, were defining the role and identifying other paid senior roles. Dawn has followed in the footsteps of Dame Caroline Haslett, the Society’s first paid Secretary who managed and led the Society during its earliest days, from 1919 into the 1930s, a CEO in all but name who ensured the Society’s survival and growth. 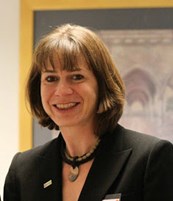 Reflecting on her time with WES, Dawn said: "It has been a pleasure and an honour to be CEO of this amazing and historically significant charity. For the past five years I have thoroughly enjoyed working on so many important campaigns and I am tremendously proud of my achievements here. It has been a pleasure to work with so many committed volunteers and staff of WES and our partner organisations. WES has a very bright future and I am sure that a new leader will bring even more opportunities for growth.”

Kirsten Bodley, former CEO of STEMNET, has agreed to act as interim lead to support WES in the transition period and to continue the process towards recruitment of a permanent Chief Executive and senior management team. Kirsten will be the external facing contact point for the Society.

Benita Mehra, WES President, commented: “Everyone who comes into contact with Dawn recognises her talent in getting things done and her absolute commitment to women and engineering. The current trustees and council would like to thank Dawn for her transformational work with WES. We hope that we will continue to benefit from Dawn's energy and enthusiasm in the future as this 97-year old organisation looks forward to celebrating its centenary in 2019.

“We would also like to welcome Kirsten Bodley on board. We are very lucky to be able to count on someone as experienced and as highly regarded as Kirsten to join us and support the Society.”

More information about WES is available at www.wes.org.uk