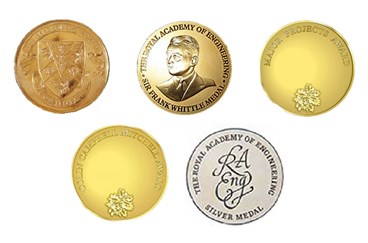 The Royal Academy of Engineering (RAEng) is currently accepting submissions for some of its most prestigious awards and medals, including the MacRobert Award for engineering innovation. RAEng has chosen to rename two of its top awards, to accurately reflect the modern engineering landscape.

Previous winners include Freeman, Fox and Partners, for the Severn Bridge and Rolls-Royce for the Pegasus engine; EMI Ltd for the CT Scanner; Buro Happold for the roof structure of the Millennium Dome and Raspberry Pi for its inexpensive credit card-sized microcomputers. The 2021 winner was DnaNudge Ltd, who developed pioneering consumer genetics technology, which was pivoted and adapted to deliver rapid, lab-free RT-PCR COVID-19 tests to NHS hospitals.

Originally founded by the MacRobert Trust, the Award is now presented and run by the Royal Academy of Engineering, with support from the Worshipful Company of Engineers. The winning team will be awarded £50,000 as well as the gold MacRobert Award medal.

The Collin Campbell Mitchell Award is given to either an individual engineer or a team of up to six engineers, working or studying in the UK. The award recognises a great contribution to the advancement of any engineering field in the previous four years. Winners will receive a cash prize of £3,000 for an individual or up to £6,000 for a team.

The Sir Frank Whittle Medal, named after Britain’s jet engine pioneer, is awarded to an engineer resident in the UK whose outstanding and sustained achievements have had a profound impact on their engineering discipline.

For more information about each award and how to apply please visit the RAEng website.