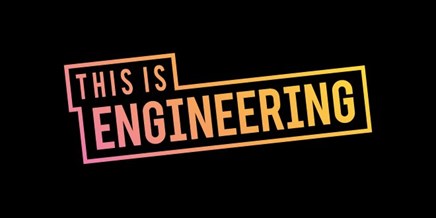 A new season of films launched on 10 September features seven young engineers working in a range of industries, from blockbuster films to disaster relief. These films form part of the next phase of the #ThisIsEngineering campaign to give more young people from all backgrounds the opportunity to explore how they could follow what they love into a varied and fulfilling engineering career.

#ThisIsEngineering was created in response to significant demand for engineering talent in the UK – according to the latest EngineeringUK figures the annual shortfall is up to 59,000 - and narrow public perceptions of engineering and engineers. The campaign will help to reset the conversation about engineering, appealing to young people’s passions for subjects such as sport, technology and design, and illustrating through social media that the profession is diverse, challenging and creative.

The campaign launched in January this year and the first series of films have been viewed more than 16 million times by teenagers on social media. A survey of more than 1,200 young people before and after the campaign launch indicated a 41 per cent increase in the number of teenagers who said, after seeing the campaign, that they would consider a career in engineering.

#ThisIsEngineering is led by the Royal Academy of Engineering, in collaboration with EngineeringUK, and with the generous support of corporate partners. More information about the campaign is available at www.ThisisEngineering.org.uk.