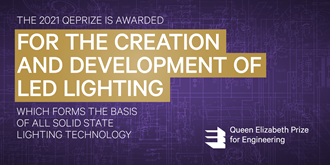 The 2021 QEPrize is awarded for the creation and development of Light Emitting Diode (LED) lighting, which forms the basis of all solid state lighting technology. Isamu Akasaki, Shuji Nakamura, Nick Holonyak Jr, M. George Craford and Russell Dupuis are recognised not only for the global impact of LED and solid state lighting but also for the tremendous contribution the technology has made, and will continue to make, to reducing energy consumption and addressing climate change.

First awarded in 2013 in the name of Her Majesty The Queen, the QEPrize exists to celebrate ground-breaking innovation in engineering. The 2021 winners are announced today by Lord Browne of Madingley, Chairman of the Queen Elizabeth Prize for Engineering Foundation. HRH The Princess Royal will share a message of congratulation for the winners.

Solid state lighting technology has changed how we illuminate our world. It can be found everywhere from digital displays and computer screens to handheld laser pointers, automobile headlights and traffic lights. Today’s high-performance LEDs are used in efficient solid state lighting products across the world and are contributing to the sustainable development of world economies by reducing energy consumption.

Visible LEDs are now a global industry predicted to be worth over $108 billion by 2025 through low cost, high efficiency lighting. LED lighting is 75% more energy efficient than traditional incandescent and compact fluorescent bulbs, and is playing a crucial role in reducing carbon dioxide emissions. LED bulbs last 25 times longer than incandescent bulbs and their large-scale use reduces the energy demand required to cool buildings. For this, they are often referred to as the ‘green revolution’ within lighting.

“Engineering is imperative to solving human problems. All over the world, everyone knows the QEPrize. Most importantly, this is a team prize. I was able to do what I did in the 1980s, because of what had come before. When I was modifying reactors every morning and every afternoon continuously for a year and a half, I never thought it would be so successful.” Professor Shuji Nakamura

“This is a really special moment for me. The QEPrize is so prestigious and it is spectacular to receive recognition from The Royal Family. It is a career highlight that is impossible to beat. Engineering is incredible, and I am proud to part of something that has made such a big impact on the world.” Dr George Craford

“It is really something to share in this award win among my friends and colleagues – all five of us each played an important role, and this recognition means an awful lot. In those early days, when it was long days and nights hand-building reactors, Nick Holonyak mentored us. He really drew us in and inspired us to be part of the adventure that is engineering.” Professor Russell Dupuis

“This year’s Prize winners have not only helped humanity to achieve a greater degree of mastery over the environment, they have enabled us to do so in a sustainable way. They have created a product which we now take for granted, but which will play a major role in ensuring that humanity can live in harmony with nature for many more centuries to come.” Lord Browne of Madingley, Chairman, Queen Elizabeth Prize for Engineering Foundation

“The impact of this innovation is not to be understated. It makes lighting a lot cheaper and more accessible for emerging economies. For example, LEDs are being used on fishing boats where previously the only option would have been paraffin lamps. They are much cheaper and safer. It is not only an extreme engineering achievement, but a societal one that has a significant impact on the environment.” Professor Sir Christopher Snowden, Chair of the QEPrize Judging Panel

The winners will be formally honoured at a ceremony later this year; they will receive the £1 million prize and an iconic trophy, designed by the 2021 Create the Trophy winner Hannah Goldsmith, a 20-year-old design student from the United Kingdom.

Lord Browne also announced a change in the QEPrize cycle to reflect the fact that just as engineering is continually evolving so too is the QEPrize, which will now be awarded on an annual basis.

For more information about the winners and the QE Prize, please visit the QE Prize website