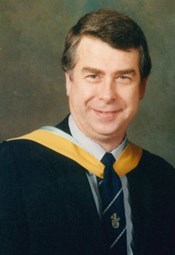 The Engineering Council was saddened to hear of the recent passing of Barry Dobson CEng FIET, who volunteered extensively for the Engineering Council by serving on its Board of Trustees as Deputy Chairman, Chairman of the Finance, Audit and Remuneration Panel and the International Advisory Panel.

"Barry Dobson, former Institution of Incorporated Engineers (IIE) Chairman and Institute of Engineering and Technology (IET) Trustee, has died at the age of 71. He will be remembered for his international work on mutual recognition of engineering qualifications and the merger negotiations of the IIE and IEE to form the IET.

Barry began his career as a radio and television apprentice in Derby at the age of 15. Thirteen years followed with the pioneering British computer manufacturer ICL. During this period, he spent time in Russia providing training for engineers on ICL mainframe computers being installed in Protvino at the Rosatom Institute for High Energy Physics. At the time the institute was known for having the world’s largest proton accelerator. This was during the Cold War era and the UK engineers were always fully aware of being monitored.

Barry then moved into education, first as Senior Lecturer at Luton College of Education and later as Head of Engineering Technology at Stevenage College of Further Education. He completed a Physics and Engineering degree by part-time study at The Hatfield Polytechnic and graduated with a commendation and as best student in year.

In 1992 he moved to North Hertfordshire College (NHC) as Head of Engineering, Science and Technology and subsequently completed his educational career as a Director of NHC.

He was always active in the professional engineering world, particularly encouraging the next generation of engineers and technicians to become properly qualified and gain professional registration. He chaired numerous institution committees and was Chairman of the IIE Council in 2005-2006, leading on behalf of the IIE, merger negotiations with the IEE. He was signatory to the merger agreement that formed the IET and subsequently became an IET Trustee.

Barry volunteered extensively for the Engineering Council by serving on its Board of Trustees as Deputy Chairman, Chairman of the Finance, Audit and Remuneration Panel and the International Advisory Panel.

On behalf of the Engineering Council, Barry chaired the international working group of the Washington Accord, charged with exploring the recognition of educational qualifications leading to the registration of Engineering Technologists, Incorporated Engineers and Technicians. It met for the first time in Canada in 1999 and the Ottawa Intent was signed in Sydney, which became the Sydney Accord signed in 2001 in South Africa.

In 2002 he was signatory to the Dublin Accord for Engineering Technicians. He chaired both the Sydney and Dublin Accords for over 10 years. In 2007, he was awarded the Engineer Council of South Africa’s Merit Medal for Most Outstanding Service for his contribution to the International Engineering Movement for recognition of Technologists and Technicians. He was the first non-South African recipient of this honour.