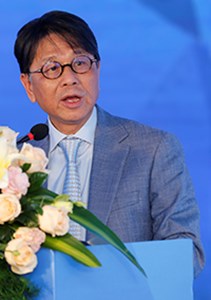 What inspired you to become an engineer or pointed you towards an engineering career?
The Yook Tong Electric Company was my family’s business, so it was natural that I had opportunities to make toys out of electrical components when very young and would wish to be an engineer. When, at 13, I signed up to attend engineering night classes at Hong Kong Technical College (predecessor of Hong Kong Polytechnic University) I wanted to study mechanical engineering, as I was fascinated by the turning of massive train wheels. However, I was not sure how to spell the word “mechanical” so wrote down “electrical” instead. Later, I studied Electrical Engineering in Chicago in 1976 followed by two Law degrees.

Please describe your role or position within your workplace.
Since 1976 I have been a Director of Yook Tong Electric Company, our family business. I manage a team of professionals on technical projects in the electrical and building services sectors. Our company supplies whatever the client needs, from technical services to manufactured items, including specialised electrical and mechanical equipment. The company used to import goods from the West and adapt the products and services for the standards necessary to work within Hong Kong and other Asian countries. We were importing UK products to Hong Kong from the 1940s until the 1990s when technical manufacturing capability increased across the regions of Hong Kong and we now export products from Hong Kong into Europe and the UK.

Are there any particular challenges or unusual aspects to your role?
I find one of the most challenging parts of my role is introducing British corporate practices into Hong Kong, such as health and safety, updating environmental regulations and encouraging the need for employee wellbeing. Part of my work is to decipher the meaning behind engineering standards, to meet local needs. This entails going back to basics and not just box ticking. I introduced what were then British Standards, equivalent to the current ISO 9002 (on quality management and quality assurance), to the Hong Kong Housing Authority. This was the first governmental organisation in Hong Kong to stipulate contractors with quality compliance in addition to equipment with British Standards on projects.

I believe that one of the greatest challenges in engineering is the need to cooperate with other disciplines and to be a team player. As I said in my interview with the Chartered Institution of Building Services Engineers (CIBSE) Journal after being designated President-Elect, “The world is depending on what we do to ensure we have healthy and productive places to live and work for generations.”

What do you find most enjoyable about your job?
I believe one of the most enjoyable aspects of my job is the satisfaction of knowing how to make a difference and being appreciated for it.

Is there a great professional achievement or high-profile accomplishment that you would like to tell us about?
In 2008 I was elected President of the Hong Kong Institution of Engineers (HKIE), I had joined the HKIE as a Member in 1984 and became a Fellow in 1991. For the year 2017-2018, I was the first President from Hong Kong for the global engineering institution, CIBSE. The Hong Kong branch is one of CIBSE’s largest and my election acknowledged the contribution of Hong Kong and the region to the practice and development of building services engineering. Then in 2018, HKIE awarded me an Honorary Fellowship in recognition of more than 30 years’ contribution to the institution and the wider engineering industry.

In what ways has registration benefitted your career?
I have been honoured with many roles of responsibility within electrical and mechanical engineering. For example, in 2005/6, I was appointed by the Education Bureau to set up the qualification framework classifying skill levels for ten disciplines of electrical and mechanical engineering and served on Hong Kong’s Vocational Training Council and the Electrical and Mechanical Services Training Board for some 15 years. I also held the post of Chair of the Engineers Registration Board overseeing qualifications and registration of all disciplines of engineers working in Hong Kong. I was the founding Chair of HKIE’s Building Services Division and in June 2019 was Chair of the Engineers Accreditation Board overseeing both the Washington and Seoul Accords and representing HKIE at the International Engineering Alliance Meetings (IEAM).

Is there any advice you would pass on to someone considering professional registration?
Engineers should see their work as an expression of the principles of integrity and professionalism, and act in the public interest. The work we do is a representation of our craftsmanship and is not only done for compliance or to meet minimum standards. When I was interviewed by Liza Young for CIBSE Journal on my election as President of CIBSE, I explained that some engineers are simply completing a ‘checkbox exercise’. I believe that the present compliance systems mean many engineers have no incentive to go beyond the norm, but engineering is more than basic compliance. I think that tenders should be based on performance rather than lowest price. Those who apply for professional registration have to fulfil a rigorous competency evaluation and ethical principles are also integral to the mind-set of those who become registered. I explained my thinking in my inaugural CIBSE Presidential address; of the three core missions of the institution, to promote the science, art and practice of engineering, art is the most important because it is the structured and principled nature of the art of engineering that separates competent engineers from truly great engineers.

Where do you see yourself in your career in five years’ time or what are your future ambitions?
Following my year as President of CIBSE, I can see myself using my experience in engineering overseas for the future benefit of Hong Kong engineers.

Do you participate in any other career-related activities, such as mentoring, volunteering or membership of other engineering groups?
I continue to be involved through being an appointed member to the HKIE Executive Board and a Trustee of the HKIE Benevolent Fund.

Outside work, is there any activity you enjoy doing in your spare time that relates to engineering?
This may sound counterintuitive, but when I was young, I was scared of heights (I could not go near windows in tall buildings and found even going up in a lift was nerve-wracking), so after training for a pilot’s licence I looked my fear in the eye by forcing myself to stall the airplane. Now when I have a chance, I fly around various cities for sightseeing – just to feel the machine through my hands. As a plane passenger I am still scared but less now than before. Even music is related to engineering – for electrical engineering, I play an electric guitar and for mechanical engineering, I use the foot pedal to play bass drum.